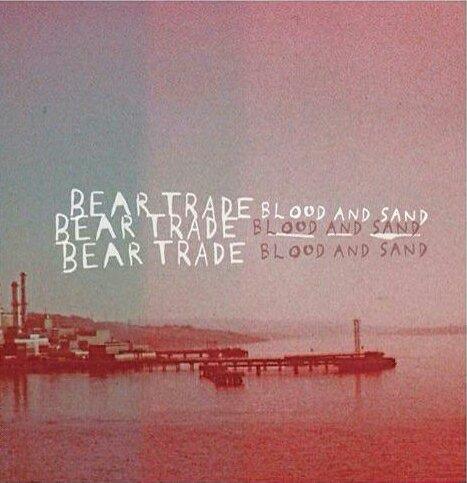 Where bear trade make a mockery of the concept of The difficult second album.

Paint a picture in your mind of Northern England and a band singing in the ruins of a derelict building, singing through the grime and dirt and greyness of a country split.

There’s a revolution going on you know, a musical one. Stuart Maconie wrote for a book, stealing a line from the KLF – ‘It’s Grim Up North’. In it it is questioned where Northern England starts. Bear Trade are based in Sunderland which is very much in the right land area but it’s the land mass that is home to the likes of Stay Clean Jolene, Dauntless Elite and most definitely Leatherface. bands that are buring the musical revolution torch. Bear Trade will have the inevitable Leatherface comparisons but I’m putting it to you they’re better. Not Superstitious is one of Leatherfaces finest moments. I’ll never forget hearing Frankie singing it live and thinking it doesn’t get much better. That feeling is replicated right throughout this record. I have a wry smile on my face typing this, that wry smile is constant once bear trade are singing.

These are not just songs, they are stories of life, tales of everyday travels. They are a continuation where the 6 track debut record left off. Whisky On A bluebird was my introduction to Bear Trade. An independent release, brought out by Waterslide records. I heard it and wondered why I’m not reading about this band everywhere. I then researched the band more and found that they had served their apprenticeship and well. Each of the 4 have been in various bands who have been hanging around the english punk scene for years. Punks who went in a different direction, punks that took a tune and gave it an English tyle. Bands like Blocko, Former Cell Mates and Southport. Maybe it’s the northern angle, maybe they just don’t have the ingredients for coolness. A guitar assualt with tunes galore blazing through and a siging style that almost feels like you are sitting having a chat with them.

One response to “Bear Trade – Blood And Sand”