My Favourite Gig by Beki Bondage 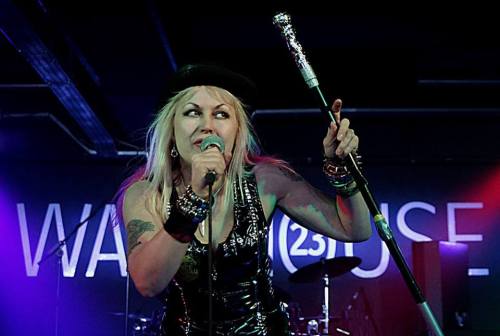 This is the third in a series all taken from the Fanzine Hope *.2. The fanzine sees a collection of 70 contributors from the punk rock world.  All asked the same question What is Your Favourite Gig. The zine is €5 including postage to anywhere  It is a benefit for Pikpa Refugee Centre, Lesvos   Pay by paypal, here

I don’t actually have a favourite gig of all time but one of the most memorable ones I played was the Altavoz Festival in Medellin, Colombia.

Our guitarist Lumpy doesn’t like flying so he got some Diazepam from the doctor to calm his nerves but the doctor didn’t warn him that you’re not supposed to mix alcohol with Diazepam. On the day of the flight we got to the airport about 7am and Lumpy was in the bar having a drink by 8am. We boarded a couple of hours later for a 7 hour flight to Miami where we were to get a connecting flight to Medellin. By the time the plane was ready to land in Miami there were 13 small empty red wine bottles in the pouch in front of Lumpy’s seat, and he was most insistent that he didn’t need to fill in an immigration form to pass through US customs.

The bassist, drummer and me all filled in customs forms and after queueing for about 40 minutes passed through US immigration and got ready to catch our connecting flight. Of course, after queuing for some time Lumpy had been turned away by a Customs Officer and told to fill in the form but was confounded by the fact that it was written in Spanish and being off his head he didn’t think to turn the page over to the English side! We were panicking as there was no sign of him and we had to catch our connecting flight so we went through security and asked the flight attendant on the Medellin flight to delay the plane because one of the band members was missing.

At this point we didn’t even know if Lumpy was still in the airport as he was in such a state we expected US Customs to refuse him entry and send him back to the UK. I thought we’d be doing the gig as a 3 piece and that I’d be practising very heavily for the next few days as I’d be playing lead guitar!

Eventually a staggering Lumpy appeared and he boarded the plane, berating the rest of us for not bringing his bag through security (you can’t bring someone else’s bag through airport security but try explaining that to a Yorkshireman who’s mixed a large quantity of wine, lager and spirits with Diazepam at high altitude). The flight to Medellin lasted about 3 hours and when we landed we were filmed coming through the gates by Colombian TV.

We were taken to a 5 star hotel and for the next four days we were wined , dined and expected to promote the show, which was fine except for the fact that Lumpy’s bag hadn’t turned up so he was wearing the same clothes for 5 days!!!! A local tattoo artist took pity on him and gave him a t-shirt, but apart from that everything he wore was 5 days old and Medellin is very humid so he was somewhat ‘ripe’.

We did various interviews for TV which was quite weird as we were used to being ignored in the UK so found the Colombians’ interest in us rather strange but very flattering.  We did a secret press conference and were escorted by police with hand guns into the theatre and we were amazed that it was packed full of people wanting to see us. It was like a surreal version of a chat show with the audience made up of Punks. There were more people at the press conference than at some of the gigs we played in England.

The people we met were awesome and it was very,very humbling to learn that our first album had inspired so many of them to get into Punk, some had even built their own guitars, now that’s DIY!!!! There is a lot of poverty in Colombia so Punk is a lifeline for many people, you couldn’t over estimate its importance. Every day a great guy called Roman would collect us from the hotel and take us out for lunch followed by promo. Roman had won the Colombian version of ‘Big Brother’ so he was a bit of a celebrity and a real character.

We looked round a toy shop in a shopping centre and all the staff knew who we were because we’d been on TV, so we had to pose for photos. We also did the ’sightseeing tour’, you have to do it because the mayor arranges it specially for the visiting bands, so there we were at the back of the bus with a Polish metal band  like naughty school kids.. We visited the university and met some of the students and the whole day was filmed and televised, we were even filmed when we were eating. We’d never done so much promo before and were relieved to get back to the hotel thinking we would get a break from the cameras, but there was another TV presenter with cameras waiting for us in reception!!!

Like I said before, we’re accustomed to being ignored so all the attention and media interest was quite overwhelming. The gig itself was amazing, we played in a stadium to an audience of 30,000 people and the show was televised live.

I’m used to having the audience up close and not having much space but the stage was huge and I had to cover a lot of ground to get to the front to commune with the crowd.
We were the most tired we’d ever been after the show, partly because of the altitude and partly from having been on the piss for 5 days, but being typical musos Lumpy, Wayne (bass) and me went out to a bar after the show rather than doing the sensible thing and going back to the hotel for a kip.
The return journey was quite arduous as the connecting flight from Miami to London was delayed so we hung round the airport bar for about 5 hours and were pretty out of it by the time we caught the London flight.

A day later we were back in the UK playing some small club gigs up north, business as usual!