Theresa Dwyer opened conference discussing how unequal the world still is. International Women’s Day is next Tuesday with a theme of achieving parity. IWD is a celebration but also a statement of how far society has to go.

Brian Campfield, President ICTU spoke of the daunting task but in this historic year it is good to focus on achievements by and for Women in the past 100 years.

Sustainable development agenda was agreed in September last year but around the world gender inequality still exists. This represents super exploitation, providing equal access for all is the only thing which can ensure economies will be successful in the future. We were told that 4% of CEO’s are women.

Patricia King is the first female General Secretary of ICTU and along with Alison Millar who is the first woman to be general secretary on NIPSA there are small signs that times are changing. Patricia spoke on the current state of inequality in Ireland
inequality is a persistent feature in Irish society. North and South women are severely underrepresented in our political system. The Irish Constitution has no reference to gender equality AND no reference to fathers. Lack of commitment in practice to improving gender inequality, National Women’s Council funding was slashed and combat poverty agency was disbanded in 2009, if you take away mirror of reflection on how bad poverty is/ then you take way the signal that shows people in poverty
65% of workers on minimum wage are women. Women are managers of poverty in low income households. Dunnes dispute highlighted worst behaviour in companies, don’t underestimate the value in the message that the Dunnes workers had.

There is a Lack of affordable and effective childcare system. Highest childcare costs in europe, legislative measures must be introduced. incoming southern government Invest in properly resourced childcare system. Women are less likely to have independent access to pensions. Gender pay gap is 8.5% in North and 14.4% down south. Ireland is out of line with representation on companies boards. 43% of irelands top 500 companies have no female representation, 9% in total have membership. Women are severly underrepresented in senior grades in Education and Public Service.
Over 50% female memberships and full-time officials and positions of leadership are predominately male
Patricia finished by reminding delegates not to be complacent because we have elected a female general secretary. We need to do better
Essential step to reducing inequality is t lift workers out of the poverty trap. Let us resolve to concentrate all our efforts to achieve fair work for all

Motion 3 Campaign for an effective solution to the Cost of childcare in Ireland carried unanimously,, Childcare is a barrier female participation in trade union issues

Motion 4 Support the development of a programme on mental health awareness, including needs and issues of women in the workplace. As amended to include current cuts in Social Welfare for under 25s to put pressure on Govt to put a fairer system in place, carried unanimously

Motion 5 Care Homes and Female Employees
Call on ICTU to put pressure on private sector providers to review their decision to close care homes. and for NI Assembly to take over the homes to provide security for occupants and staff. Do we want to treat elderly people as commodities in society Request to remit was accepted as it is left in hands of negotiators

Motion 8 Bullying and harassment calling on ictu exec to publicly highlight bullying with a view to ensuring that affiliates and members along with employers and workers in general are fully aware of the rights and obligations in dealing with and preventing this kind of negative behaviour in the workplace.

Motion 9 – Women and the economy, calling on government ot carry out meaningful equality impact assessment before spending decisions are made, monitor the impact off decisions and revise policies when it is clear that there is a disproportionate impact, introduce a dedicated women’s employment strategy to address the dominance of women in low paid work and end public sector pay freezes and caps, introduce stronger legislation on equal pay audits, greater transparency and better quality part–time and flexible work opportunities

Motion 11 around a pledge to end zero hours and casualisation, looking back on 100 years of struggle that continuing absence of women at the top of trade union leadership will not do anymore, outcomes of the conference must be core part of trade union movement. Seek to integrate policy on zero hours into our bargaining strategies and, industrial action and legal action, launch a solidarity pledge to make zero hour contracts history. This solidarity pledge will be brought to governments North and South and seek to commit a full review of these. Some strong words arose during this debate as it is obvious that workers under such precarious conditions are extremely vulnerable. trade union movement is here to better the conditions of workers in all workplaces, mandates dunnes stores campaign is being fought like a war and it is still very much a live issue.

Motion 12 was around childcare and the flexible economy seeking a strategy around childcare that provides affordable childcare that meets the needs of women working in vulnerable employment. It stated that employers have a duty to take caring commitments into account and measures need to be developed to support childcare providers and non profit organisation, including grandparents was unanimously passed

The afternoon session started with a presentation by Margaret Ward, Irish Women, Suffrage and war

Women’s fight for citizenship in Ireland is going on since 1871 when North of Ireland Women’s suffrage association were set up for the right to vote. In 1912 a feminist newspaper, the irish citizen, was set up – “For Men and Women equally, the rights of citizenship. From men and women equally the duties of Citizenship” With impending Home Rule on the horizon suffragettes across the island started a militant campaign, including destroying buildings and horsewhipping of people. Focus of Suffragettes changed when the First World War started. In 1915 there was a suffrage and peace conference in the hague which attracted 1136 delegates. Irish women couldn’t travel and held a protest in Dublin which Pearse sent a message to.

Cumann na mBan fought in the rising of which the proclamation called for equal rights for all, and in 1918 Constance Markievicz was elected – the first and sole woman successfully elected

Mary Muldowney also spoke about the brave women who not just fought in 1916 but were involved in other activities at that time, be it pacifist like Louie Bennett who became General Secretary of ICTU or other trade unionists like Delia Larkin and Cissy Cahalan

Relatively we have made a few strides forward but there are still many battles to be won. Countess Markievicz is spoken of as if she was the only woman involved in the 1916 rising, but that certainly was not the case. Winnie Carney was in the GPO during the rising and went on to be secretary of Irish textile workers union. Rosie Hackett was a trade union activist for 60 years. Hannah Sheehy Skeffington was nominated to be in the first provisional government.

50,000 women got work in munitions factories with canteens serving lunch during the first world war, also separation allowances were given to women whose husbands were fighting for the British army which helped alleviate the horrendous poverty that existed

Mary’s excellent presentation ended with a nod of appreciation and recognition of Dunnes Stores workers in 1984 and how they stand for everything that was great about the trade union women in 1916. Remember the spirit of women who wished to bring fairness and equality to everybody

The singer sings a rebel song

and everybody sings along.

Every damn rebel seems to be a man.

For he sings of the Bold Fenian Men

And the Boys of the Old Brigade.

What about the women who stood there too

Did your daughters run and hide at the sound of guns?

Or did they have some part in the fight

And why does everybody try to keep them out of sight?

For they sing of the Men of the West

And the Boys of Wexford too.

Were there no women living round those parts; 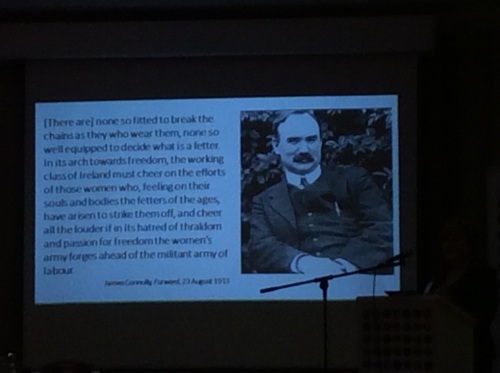