Thoughts about the movies 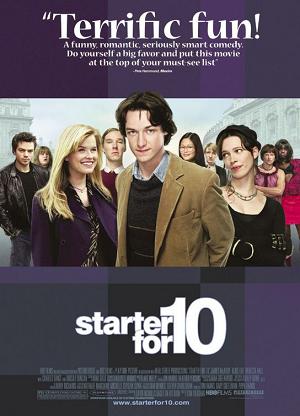 First off the soundtrack was very evocative and captured the highly charged and equally fun times in college in the 80s. Three of the band featured played at Trinity either right before, or while I was there; The Smiths, The Cure and the Psychedelic Furs. It was also great to hear a bit of Paul Weller too.

The basic idea of the film was pretty simple; smart boy from less privileged background goes to University. Just as the Undertones sang “He loves University Challenge” and the fun ensues. It doesn’t sound like much, yet the film is really well written and a lot of the characters reminded me of people I met/avoided when I was in college.

One of the reasons I enjoyed it so much…I laughed out loud quite a bit…was that the acting was so good. You probably couldn’t afford to assemble a cast like this in 2013:

Catherine Tate as the mum? Priceless!

James Corden as the ‘I love heavy metal’ pal.

There was even a chap from Holby City in it…not that I watch soap-operas!

The lead actor James McEvoy was also excellent in the Last King of Scotland, and apparently was in an X-Men film.

Rebecca Hall has done lots of big films since, while the other main actress is the daughter of Trevor Eve (Shoestring! And Waking the Dead!)

It had that great witty banter that Hot Fuzz and Shaun of the Dead had. And I can’t think of a film that made me laugh as much since those two. Well worth a watch as the cold autumn nights draw in.

And yes there really was a guy EXACTLY like the ‘man just back from India’ in Trinity while I was there. 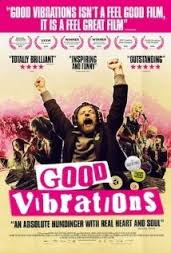 Niall Hope recommended this film to me. Some of the really cool people I get to work with on the Popular Music course also raved about it. Then I witnessed an excellent discussion about Northern Irish punk, and the film at the Rebellion Festival, so the time was right.
I loved it.
One of the significant points made during the discussion was by Greg from the Outcasts. He said, and I paraphrase: ‘every scene needs a charismatic character.’ And Terri Hooley was that character.
Hooley comes across in the film as a loveable pacifist in a warzone. His dad was a rather stern socialist and Hooley’s huge cultural achievement – opening a record shop in Belfast and launching his similarly named Good Vibrations label – seems driven by love not money.
His wife was a really sympathetic character in the film. And a good reminder of how many of the icons of the music industry are supported, funded or sustained by the women in their lives.
I loved so much of the music on Good Vibrations as I was growing up. It simultaneously made Belfast seem closer and further away. The bands tended to be better than their contemporaries in the South, and naturally the Belfast of the headlines made most of us bury our heads in the sand.
Lots of the Good Vibes’ bands have aged very well. I still love hearing Rudi, The Outcasts, The Undertones and even a bit of the Static Routines. The very first band I ever saw onstage were on Good Vibes – The Tearjerkers who opened for Dexy’s Midnight Runners in the Mansion House in 1980. They made a great impression.
Another point made by Greg from the Outcasts: the Northern bands felt it was their responsibility to be very tuneful. And that is evident in the work they left behind (and still perform with energy, enthusiasm and fun).
Yet ultimately the film was a bout the slightly madcap Terri, who was so excited by the young punks that he wanted to support them. He did this not just by selling their records, but by funding their recordings, promoting them and knocking on doors on their behalf.
Another band from the South he championed were Zebra. I interviewed a super cool chap from the band, Brian, a while ago for my book. He told me how John Peel came over to Dublin for the Dark Space gig in the Project…and when they got off the stage, Peel and Hooley congratulated them. And Hooley offered them a record deal. And that’s how Ireland’s first reggae band released a single
In a sense Hooley is a pivotal figure on the Irish DIY music movement. Spurning money…loving music. 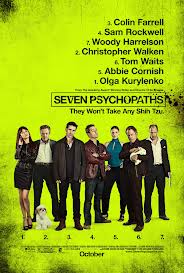 In Bruges was a much better film for me the second time I saw it. Initially it felt like it was an OTT Irish tale of killing, vulgarity and misoginy. I lightened up for the second viewing and found myself smiling along with the helplessness of the characters.

7 Psychopaths is almost like a sequel with different characters but still helpless and likeable in some ways, ridiculous and mean in so many others. This is my review after one viewing.

It is the tale of Colin Farrell as an Irish screen writer with a drink problem (imagine that eh?). He is bereft of ideas but his close friend starts giving suggestions. Of course unbeknownest to Farrell he is getting an insight to his close friends life which is all about mutilation. It is tarantino like in its execution and executions. Blood is splattering everywhere as the story evolves and Farrell isn’t happy with this. Farrell wants peace love and understanding but the world isn’t quite ready for this type of movie.

There is an impressive cast of psychopath including Christopher Walken as a polish Quaker pacifist, Tom Waits as a serial killer of serial killers and most impressively of all, Woody Harrelson as the gangster killer who comes looking for his kidnapped dog. With Farrell and Walken pushing Gandhis policy of an eye for eye leaving everyone blind Sam Rockwell leaves us all amused saying that will leave one person winning out. he is delighted with this prospect as his two felllow travellers look on totally bemused. It is that kind of film, very entertaining.