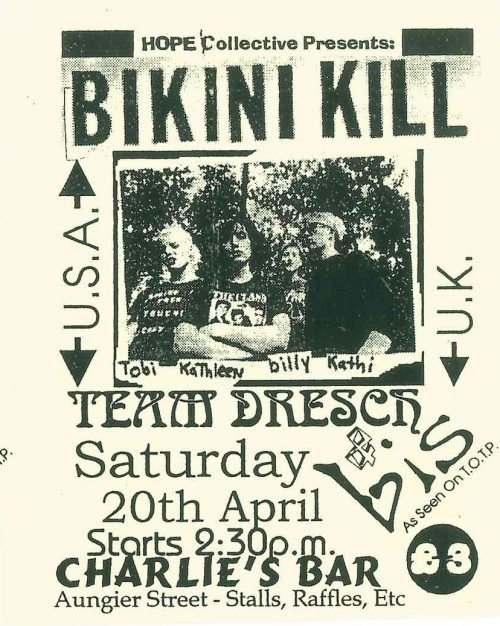 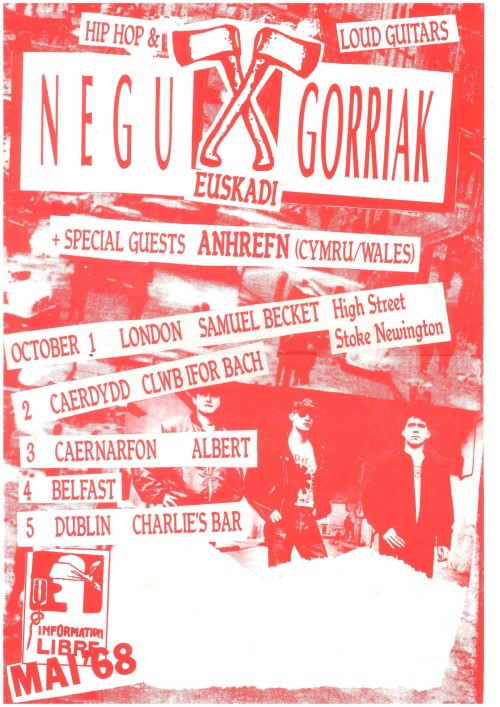 Negu Gorriak also stayed in the “Dumps”. They were from the Basque region and couldn’t speak a word of English. They didn’t want to keep their gear in the van and so we filled the whole room up with equipment. I’ve no idea where they slept – it must literally have been ON their amps. Unfortunately they stayed over the day the landlord came to collect the rent and I wasn’t going to be there. I left the money in an envelope, stuck it to the outside of the door with a note for the landlord. Needless tosay that made him more intrigued and in he came. He found a room full of musical equipment, one Basque national with no English and NO explanation. He had plenty of questions in thefollowing weeks. My long lost misunderstood Basque friends I explained. 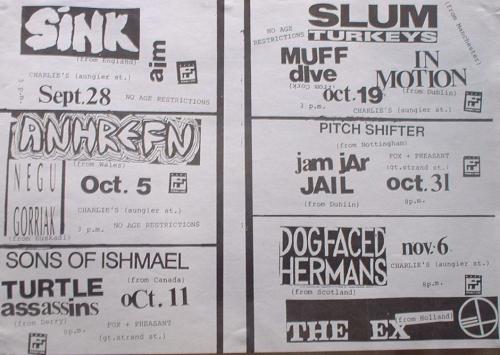 This was the twelfth Saturday afternoon gig of the year in Charlie’s. Southern Studios had been in touch about Babes In Toyland playing. They were going to play Belfast and Cork with THERAPY? and wanted to fit in the capital while they were over. I was delighted because John Loder was involved in Southern. John was involved with Crass and Flux Of Pink Indians and also helped out with Ian McKaye from Fugazi. This was a great gig and NO, Therapy??, did not play the Dublin gig. There was confusion before this gig as the rumour spread that the “Babes” had signed to a major label.

Given our refusal to deal with bands on major labels it may have seemed contradictory to put on a band just because of a link with John Loder. However we were told they were not on a major when they visited Ireland and that’s all the reassurance we needed. They subsequently signed to (and got dropped from) a major but when they played Ireland they were aligned to Southern. It may seem a small and inconsequential point but it was important to ‘Hope’. As mentioned, ‘Hope’ didn’t want to be part of the major record label’s machinery for their bands.

We had NO guest list at our gigs, we treated all bands the same, the same way we treated people who paid in to the gigs, and anyone involved in helping with a gig paid in. This way there was no “them” and “us”. For us to put on a band tied in to a major record label would have been a sign of support for the band, something we didn’t want to do through our gigs, regardless of individual feelings. Monday night and the “Babes” played the FOX. Another surprise gig, my surprise being when I was asked for ALL the money (£300) from the gig to go the “Babes”. “I think they deserve it after tonight’s show, don’t you”. I was too busy dreaming of those CRASS records and thinking this isn’t right to give the reply I wanted to.

Jul 13 1991 Econochrist, World Of Drums, Jam Jar Jail – Charlie’s
Jul 15 1991 Econochrist, The Grown Ups, Ciunas – Fox + Pheasant
I had a bedsit that I gave over to bands when they were visiting. The neighbours never complained but I’m sure they wondered. I was away for the Econochrist tour.  There was a mix-up over their Derry gig. It was cancelled but they travelled up from Dublin not realising.

I don’t know whether they were annoyed or not but they decided not to tidy anything up after themselves in my small cell. When I got home, one week later, there were things growing in my pots. Awful. 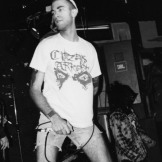 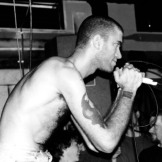 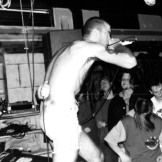 Again a case of two tours happening simultaneously and of us not wanting to say no. GO! from New York were an outspoken hardcore band that tackled many issues including homosexuality and discrimination. They wanted to come over with Decline form England. NOFX on the other hand wanted to do a few gigs in Ireland as part of their European tour. The band made a living through their music, which poked fun at everyone. Getting the two bands on the same bill would provide them with an  excellent opportunity to confront each other – a far better forum than discussing it through the letters page of big American fanzines like Maximum Rock’n’Roll. This is something that is very common throughout the whole of the punk/hardcore community. People find it easy to complaining letters pages aboutthe actions of others.

We thought it would be interesting to see what would happen on the day (and make for a pretty good gig) Nothing did happen on the day except the 140 people at the gig seemed to enjoy themselves and NOFX then played in the Fox+Pheasant on the Monday evening. GO! + Decline were only over for 2 days so they missed the Monday gig. The gig on the Monday evening was equally  insane with all 4 bands playing a diverse sound. It was announced on the Saturday afternoon that NOFX would be playing a surprise gig. I think the only surprise for people was that GO! weren’t also playing. 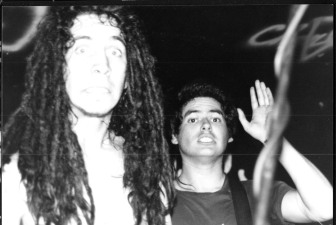 This was the first gig since the farce of no-one turning up to see The Keatons the previous month. Coitus were based in England and featured Skinny, who used to be in
Paranoid Visions. FUAL were from Belfast and were doing an Irish tour.. Both bands asked to play on the same day so they were accommodated together. Paranoid Visions also played this gig and the records show they were given £5 for their efforts. To their credit Paranoid Visions made nothing of this fact.

The Keatons, Tension, I Am The Waltons

One month after the Herb Garden disaster came the KEATONS fiasco. 20 people came to Charlie’s to see them with 2 other bands. The Keaton’s managed to play in Cork,  th the help of Emmet, and in a new club in Dublin called the Anarchy  Night Café, which at the time was based in Fibber Magees, Parnell Street. However given the circumstances of the Charlie’s gig it just seems so irrelevant.

My only memories of The Keatons are of my Nan dying some days before the gig. It had a devastating effect on me and even now I look back with huge fondness on the women who plied me with chips from a very young age. She was great and I loved her. I never told her that to her face.

It cost £70 to hire Charlie’s, including p.a., sound engineer and staff. This equalled 30 people at £2.50 in and allowed us great leeway in agreeing to put bands on. The idea was to get people to see all sorts of music, once the bands were independent. To be honest it didn’t really work. There was a diversity between the bands but unfortunately people still only went to certain gigs. Despite the consistent few regulars in attendance, each band seemed to attract a specific audience.

I suppose people like what they like and that’s all. AC Temple made a great racket. They weren’t a straight-ahead punk band/ hardcore band or even an indie band. However, after this gig I felt like stopping. ‘Hope’ could have just concentrated on agreeing to put on the formulaic hardcore/punk bands – but then it would have seemed like a job or service. That certainly wasn’t the point. Instead of not being involved anymore I decided that if the band were happy to play and I was happy to be involved in putting them on, then the people who didn’t show up weren’t going to affect me.  It took gigs like this to make me realise that. 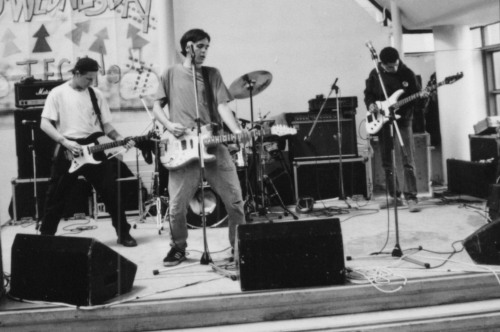 Christy Colcord in England was a contact for many American bands who wanted to tour Europe. She heard about what we were doing through a friend of hers in Belfast and
rang to ask if QUICKSAND could come over. They had released one 7″ on Revelation Records and featured people who used to be in New York bands Gorilla Biscuits and Youth Of Today. No matter what bands they had been in before, we would still have put on the gig – if they were willing to travel, we were happy to give them a place to stay.

However, after hearing the music of Quicksand we were very happy to have accommodated them. By now Bolton Street college were offering to do gigs and Fran in Kildare asked about putting bands on Saturday evening. A band could feasibly play Charlie’s in the afternoon and drive the short distance to Kildare for a gig that night. It meant a lot more work for the band but it also gave them a greater chance to cover their costs of travelling over to Ireland. Julia and others in Belfast got the Belfast Gig Collective going so bands could travel up there on a Sunday for a gig.

There was a Thursday – Tuesday special offer on the car ferry so it proved cost effective to come over to Ireland on a Thursday night/Friday morning to play Friday lunch, Friday night, Saturday afternoon and Evening, Sunday evening and finally  Monday again (usually in Dublin). Quicksand availed of this offer. 120 people were at the Charlie’s gig – the venue wasn’t packed but many, many more say they were here. 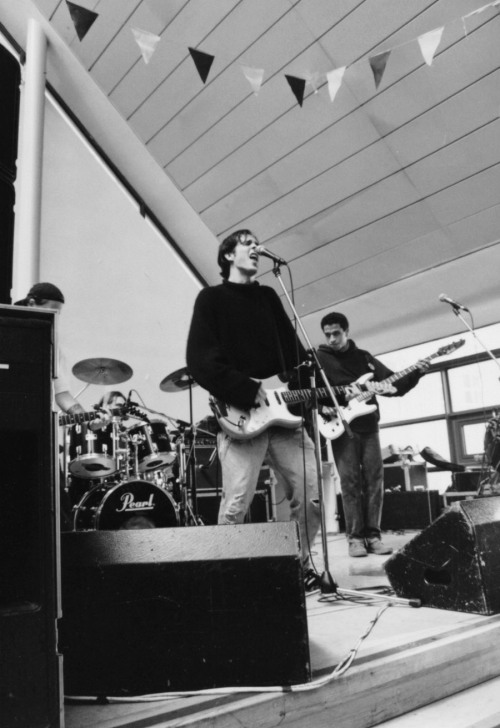 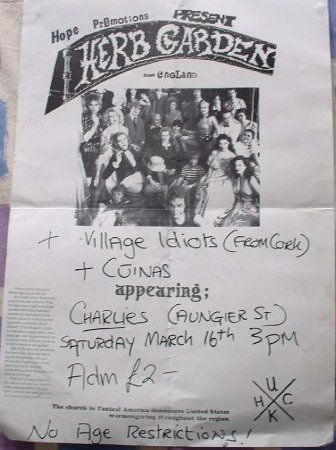 The Herb Garden gig was a disaster. The first really bad one in Charlie’s, it brought back memories of Antic Hay in the Grattan. I still had this plan that if ‘Hope’ is put on the poster people would still go along to the gig regardless of who was playing. We were starting to sell fanzines and records at gigs.

People were being encouraged to bring out their own zines. We were trying to create a small community, one that could work together and help each other out.. It all worked fine when there was a band playing that people had heard of and they actually wanted to see. It also was of additional value if the band was American. Not sure why but people appreciated American bands more. In the case of Herb Garden 22 people paid in. Considering that the people putting on the gig paid in, that literally meant 22 peoplethere plus band members. Emmet Greene from Cork travelled up to this gig with the Village Idiots. Emmet has continued to put gigs on in Cork.