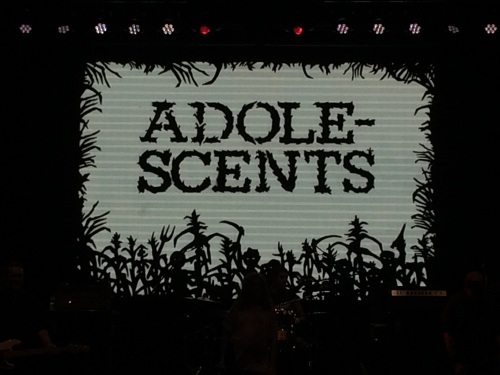 There’s always a certain nostalgia to the last day. Like the last day of a Christmas holiday as you prepare to return to work or revert to a life you had escaped for the week. The stalls that had been a hive of activity for four days are, in some cases selling off their wares, packing up after another years business done. This day also coincides with blackpools annual air show. To me it’s just war planes making a racket but for many who are camped out for the day waiting it is a highlight – maybe it’s their rebellion. There’s a huge breeze on the prom today, wonder how that will affect plane flight tracks

Captain Sensible from the damned always seemed like an interesting fella so I ambled along to the opera house to hear his irreverent talk. Most entertaining talk of the weekend. Captain leaves no holds barred as he gives his forthright opinion of people and the damned’s career to date. is manner means he can get away with saying things the rest of us would be lynched over. I then rushed to the new band stage to get a few songs from head sticks before heading back to see a piece of Omixlh from Greece Head sticks have a lovely blyth powere esque feel to them without a drummer saying 1-2-3-4 in a quaint Cornish accent before each song. Fast folk that veers toward punk with a harmonica

I know little about the punk scene in Greece but I was expecting a more d-beat sound. OMIXLH had more punk than crust feel at home in 1982 uk scene. Pretty good

Demob, from Gloucester, started in 1978 and yet still have a song about Charlie Harper being great. Their first two 7″s weren’t about punk rock legends but more about the situation with disaffected kids growing up in south west England and then finding a voice through punk rock. Sing along anthems

Andy Higgins is a man on a mission, his mission is to rid Blackpool Fc of its chairman Owen oyston before the club becomes a footnote in footballing history. Andy feels that Stanley Matthews, Stan Mortenson and more recently people like Brett Ormeroyd would be horrified at the way the club has gone downhill in recent years. It’s not like he wishes for the capitalist nightmare of the premiership but, like john Robb, Blackpool people are passionate about their home town. They feel the club should belong to the people and run not solely for profit regardless of what happens on the pitch. Andy will say Oyston out at any given opportunity and ran for election the the uk general election. He also plays in litterbug, runs a label and is doing a solo set today.

More clashes meant I had to miss goldblade, cress and Louise Distras but I wanted to hear Dave dictors story. Mdc have been on the go for many years and dave has just released a book on his experiences in it. Fast politically charged punk rock Johnny wah wah did a great job with this one as Dave spoke of the different scenes and dynamics in each one

After i had a quick chat with dave about the time Mdc played barnstormers in Dublin the nightingales took to the stagwe. Quirky sounds from this quartet. Certainly a band that continue to challenge the listener which is what punk does. No screams of ” n war, no kkk, no fascist USA ” which is what Mdc declared but this is a declaration of intent and rhythm, always rhythm with the nightingales, john Robb summed up rebellion perfectly when he said the festival is like one big John Peeel show, a huge divergence of music but a common ethos. Well the nightingales were peel favourites and belong here.

Ireland or more specifically Northern Ireland took over the empress ballroom for a little while as Belfast punks the defects and outcasts played. Punk rock bands that were very much on the edge and in a dangerous place when they started in 1979. That fear has since changed but both bands will never forget those days. the defects are the more political of the two and the title track of the new album 45 minutes is about bombs instigated by Tony Blair

For me the roughneck riot are a modern day men they couldn’t hang, maybe if the flatliners added some traditional instrument and covered the men. Banjo, mandolin, accordion and punk spirit shining through. Plenty of songs for you to scream along to. There was some power and passion on show. Class

There was a brief return to the anarcho punk scene of the 80s with anthrax (uk) and Hagar the womb. Both had those circle a’s on their records as I unfolded out every crease in their fold out sleeve to read what they had to say. Anthrax always seemed slightly more serious and little has changed. They use their songs as statements where as Hagar the womb are more stories with plenty of humour thrown in I must admit I find it confusing when bands who have so much to say with their lyrics say nothing between songs as Anthrax did. The stage is their soapbox and some slip off it.

With a collective age of 310 Hagar have plenty of between song banter. Karen does her best to be the host on stage as she opens cans for all the band which led to the inevitable spills and makes sure they are ok. Bassist Mitch joined the crowd and it was all good fun. 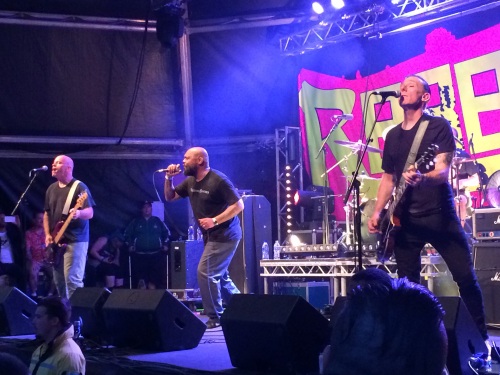 I had to catch the adolescents. Another institution much like dag nasty. Two great u.s hardcore bands. The adolescents are from south California so it was fast skate core but dag nasty, well that’s a different story altogether. Melodic hardcore songs, the only problem is they were being played in a car park…in the rain!!!! It started raining which was good as there was less people around to smoke but then there was less absorption for the sound which at the start was awful. Like playing a record at home on low volume in case the people on the other side of the room hear you. What a shame. I moved down to stand in front of the pa, that helped a bit bar for the bass drum beating against my heart. I managed to find a spot with decent sound and got lost in the greatness. Where was I?

Ruts DC, as I mentioned, are royalty. The part they play in rebellion is of a people that were the establishment when people had faith in an establishment. People to be respected and listened to. Before it all went sour

I heard three other bands doing ruts covers this weekend. Bands that otherwise played originals. Tonight it is just their songs stripped down and sounding as good as ever. A few newer songs tonight but still it was a special moment when we all stood up at the end and gave an ovation of sheer respect and appreciation.

When the last day is complete I’m reminded of how much rebellion suits this “tatty seaside town”. Remnants of the 70s are rife. The amusement arcades will have their 2p falls and 10p bingo. It seems, almost frozen in time as they look back to the days when Britain used to holiday here and reminisce about then”good oil days”. Amongst this is glimpses of modernity trying to break through, some new buildings, some redecorate old landmarks but underneath it all a people proud of where they come from and not ready for anyone to tell them otherwise. 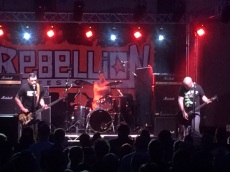 Revenge Of The Psychotronic Man 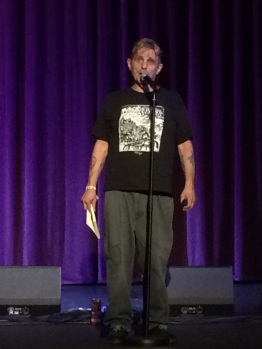