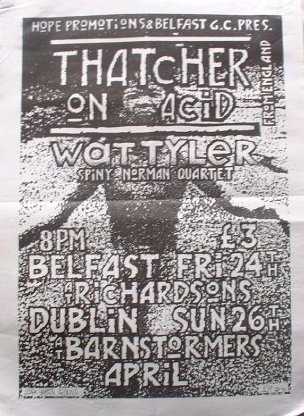 As Sean and Ben had helped out with the Statement 12” we decided it would be a good idea if both bands did a tour of Ireland. We got them gigs in Arklow, Belfast, Dublin. They were travelling over on the Thursday and the people from Anarchy Night Café were willing to let them play.

Wat Tyler had a deserved reputation for being jokers and they were making comments straight away to the crowd. Most didn’t care but any Wat Tyler gig is a good laugh and one for people not to take too seriously. Having said that though, the way they run their band is a perfect statement in itself. Fiercely independent and always willing to help, Sean and Wat Tyler became a later influence on ‘hope’.

The Attic
Yeah, yeah, it’s all true. Green Day played in the Attic. It was a wintry Sunday afternoon. They used my bass, They covered up my Sink stickers. They took off their trousers and 40 people saw it all. Retrospectively when people talk to me about ‘hope’ they mention Green Day, Fugazi and Nomeansno. If all the people who say they saw Green Day when they played with Dog Day in the Attic were actually there then the already unsteady floor in the venue would definitely have collapsed. On the day we lost £50 and the floor was perfectly safe. It’s kind of novel to be able to say that they played but I would much prefer if I was able to give you a recipe from the  band Dublin wasn’t really the party city and Green Day left for Belfast straight after the gig, but not before getting some directions and food. They had enjoyed themselves so much in Belfast the previous night that they wanted to get back as quickly as possible.

1991 ended for ‘hope’ with this gig. We had directly put on 29  gigs. We had been involved with other gigs in Cork, Belfast, Trinity, NCAD, and Kill. People from other counties in Ireland were starting to ask about putting on gigs (they either got the address from REACT or travelled up to Dublin for a gig). React was up to 5000 copies (I even find that hard to believe looking back) and there was an endless supply of bands looking to play. Being careful not to get carried away Green Day put a sense of perspective on it. 40 people.