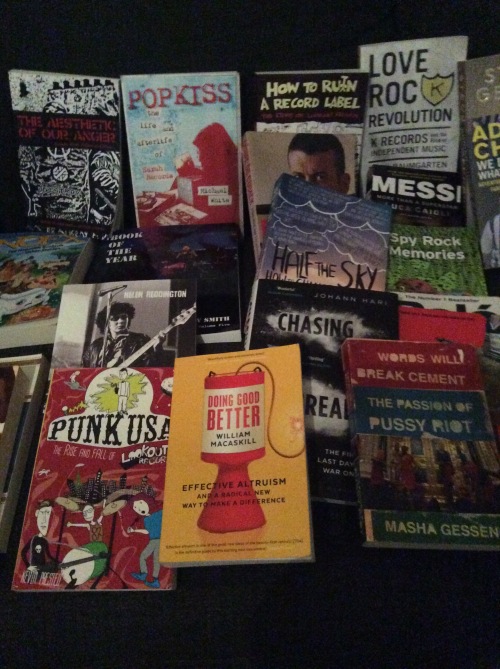 It all started with Steven Gerrard – a christmas present

The road to wigan pier followed closely.  George Orwells tale of how we can show a brighter future

Roger Casement is not only a figure in Irish Nationalist History, prior to (and during)his involvement in Ireland culminating in his trial where he stated “Ireland has wronged no man, that has injured no land, that has sought no dominion over others – Ireland is treated today among the nations of the world as if she was a convicted criminal” he was a British Foreign diplomat.  His most notable work was exposing the slave trade in Congo and the  horrendous slaughter of Peruvian Indians.  The Devil and Misteer casement tells the story of Peru whole King Leopolds Ghost spoke of Congo

As part of the challenge I asked my kids what book they would like me to read – Pele was my youngest ones choice.  A strange book about a character who exists in a world of stardom and almost seems like an alter ego of Edson Arantes do Nascimento. Luca Caioli asked is Messi More Than A Superstar and the answer is very much yes in his mind, interesting that humility is his biggest trait after being a superstar ball player

During Easter Week I decided to take a 360 turn and see how many Ross O’Carroll Kelly books I could cram in this year.  Ross is the obnoxious, sexist beast known to so many Dubliners. The teenage Dirt-Bag years is one of the early ones, his formative college years, a J1 American Visa and the theft of a statue from UCD all get the O’Carroll gloss.

One of the hardest books to read was The Wrath of Cochise, not for the level of detail of the blood feud between the Chiracuau Indians and the US Army but just the level of detail.  Terry Mort has a way with words, and it’s a long way. It was enlightening to read about the ‘White men’ being willing to loose lives in wars and use that as a tactic or about the Irish Bounty hunter James Kirker.  it is interesting that this small island has produced many people who travelled for different reasons and had an impact around the world. Kirker was a hugely successful bounty hunter, willing to work, and kill, for the highest bidder.  There were many Irish recruits into the US Army in the 1850’s – over 30% of those enlisted were Irish hunger having forced them from their homes. Then there were those being sold into slavery, a tale of woe that still continues.

I re-introduced myself to the world of pop punk and Lookout records through Larry Livermores two book and the story of Lookout. Interesting that a label with no initial aspirations other than to release records and get bands heard ended up as a multi million dollar business and the tale of how those millions made people want more. Another label I re-introduced my self to was K Records. Love Rock Revolution, the story of K was published a few years ago but I missed out on it then. It tells the story of Calvin Johnson and K, much like Lookout, a label that saw huge increases in sales when Nirvana got signed but thankfully unlike lookout K is still going.  Sarah records was another label I listened to many bands from and Pop Kiss tells its story with a glorious jangle.

The Lost Women Of Rock Music – Female Musicians of the punk era by Helen Reddington is still altogether too true as it tells the battle females have just to be recognised in rock.. Punk promised to breakthrough  as more and more females joined bands but the establishment re-established its hold and MTV had a different story to tell. It drove it underground

NOFX were a band whose antics when they were in ireland I had blocked out of memory. I knew there was a story around a fireplace and an inscription but the tides of time held no grudges. it was sad to read stories of how fireplaces in other cities, belonging to other peoples parents, were treated with similar disdain. Like spoilt children the drug fuelled lifestyle of nofx left casualties in their wake. We had to run other gigs after they left town, we had to mend a lot of bridges. This book is not surprising in its tome. Pity I like their music so much.

Jack Doyle’s autobiography slowed me down and made me realise I wouldn’t meet my target.  Instead of 1 book a week I went for one a fortnight.  It halved the overall number but still was hopeful and realistic.

This was bropught to fruitiion with somw time over Christmas allowing me to complete my final two.  How Champions Thnk gives some snippets into the mind of sucessful people and it finashed in style with the Aesthetic of Our Anger – a critique of anarcho punk, politics and music.  Although this book is aimed more at an academic audience it is an excellent reflection on the influence of Crass throughout popular culture.

So next year I will try and better this, wish me luck

12. The Wrath of Cochise – The Blood Feud That Sparked the Apache Wars

14. Larry Livermore – How to Ru(i)n a record label

15. Jeff Alullis – NOFX The Hepatitis Bathtub and other Stories

27  Mike dines and Matthew Worley – The Aesthetic of our anger