Sewage were active in the 90’s in New York around the Lower east side tompkins square park area. My image of tompkins square is a joe strummer mural on the corner as you enter. It is an area for activists and cultural terrorism, not to be confused with actual war like terrorism. They lived and played on the streets for a number of years but stopped for a decade. Now with a direction to “Celebrate our liberties which the Police and Real Estate are always looking to take away. Let’s keep our rights and livelihood safe.” they have released a record. With a design from the crusty gutter I was surprised on hearing the songs. It’s less crust and more rock with both feet in punk rock.

There’s swathes of the Damned and Culture Shock and while their Rock’n’Roll Revolution – may not be Irelands Paranoid Visions they still have that punky rocky feel. When singing about ‘Florida’ there is a hint to Germany’s Die Toten Hozen if they moved to NYC and sang about the sunshine state. The songs are pretty straightforward, almost 78 punk feel with some high pitched guitar in all the right parts. It’s good to see Sewage still punking out and still wanting to raise their voice through the gentrification. 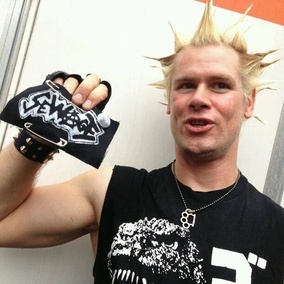