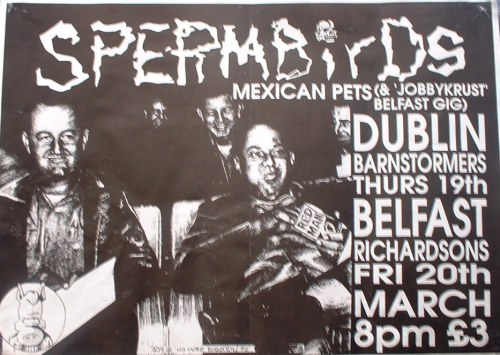 I was thrilled when Spermbirds asked to come over. They had been going for a few years and I suppose I always viewed them as a “big” band, in that they wouldn’t need Hope Promotions if they wanted to play Ireland. Robbie Foy was now booking the Attic. He found a new venue called Barnstormers on Capel Street. He bought a P.A., put it in there, and was ready to hire it out to bands. Barnstormers was owned/run by Hells Angels so some noise and people who looked a little bit “different” was fine by them. Looking back Barnstormers was the start of a new era for Hope: Charlie’s was gone for the foreseeable future; and the Attic, the Fox and the Grattan were all unsuitable if 100 people were at the gig or if one person wanted to dance.

Barnstormers could hold 200 people and it was on the ground floor, a concrete floor. People could dance the night away if they wished. Spermbirds was a great introductory gig for Robbie and Barnstormers. We took in £425 at the door, the Spermbirds got £240 and everyone seemed happy. My memories of this are of crowd surfing, a little trouble, and looking over the sea of heads from the back of Barnstormers thinking something is RIGHT here. It was refreshing to see people coming to gigs after the early “disasters” in the year.