Hope Show 115
1. Black Bank Folk w/ Damien Dempsey – Aunt Jenny
2. The Clash – White Riot
3. Paranoid Visions – From Dublin With Love
4. Against Me – Pints of guinness makes you strong
5. The Three Johns – The World of the workers is wild
6. Half Man Half Biscuit – National Shite Day
7. The Redskins – Lev Bronstein
8. The Neurotics – Take Strike Action
9. Hard Skin – The Kids Are Innocent
10. The Ex – Walt’s Dizzyland
11. The Evens – All These Governors
12. Fugazi – Merchandise

Starting off tonight with local Dublin folksters who have just released an album celebrating the events of Easter Week in 1916 in Ireland. Damien Dempsey has a song on the record celebrating the joint effort put in by women that somehow has been erased from that fight. The invisible ink is reappearing and thanks to songs like this (and the events themselves) they are getting noticed once more.
As the Rebellion was pretty much a riot why not get the Clash to celebrate it. Actually tonights show whilst coinciding with 100 Easter festivals since the Rising in 1916 is more of a ode to a list of favourite albums that i was asked to compile. I found it almost impossible to limit to double digits never mind fourteen. I tried but in vain. The Clash were top of that list though, no question.
Top Irish band is Paranoid Visions, hands down. Steadily releasing on the button songs reflecting the thoughts of a generation, a generation being ignored. From Dublin with love is from their 1983 demo.

Against Me made my list – their Reinventn’ axl rose album really is a class record. When I first heard it I was ready to follow their revolution but really you need to make your own. ‘Pints of Guinness makes you strong’ is not really encouraging you to drink guinness, sure it’s not even vegetarian.

One thing that has really struck me this week is how quick people are to dismiss a group of workers on strike if it means inconveniencing them. Our Luas (tram) drivers are on strike for better pay and conditions. The latest offer recommended by mediators was dismissed 99% by the workers. That shows a committed and united workforce. So they won’t go to work on Easter Sunday, they will stay home, eat easter eggs and not get paid. Many people will wish to get into the city to see the Easter Parade, celebrating the work of James Connolly and other Volunteers who gave up their life to create a republic. Some of these people would have travelled by luas and now they can’t. Is that reason not to support workers in their struggle?

The Redskins would have always supported strike action, as would have the Newtown Neurotics. These bands, along with the three Johns and Billy Bragg gave me a musical introduction into trade unions. I then moved on to Woody Guthries and other
traditional songs but these bands took the music I listened to and said, workers whould be in unions and picket lines should always be respected.

Hard Skin were near to my list of albums, didn’t quite get there but i thought you’d like to hear the kids are innocent.

The Ex did make it and could have been in there a few times. A more recent, if 2001 can be classed as recent, release made the list. Dizzy Spells is 12 classics mixed into an overall great. Walts Dizzyland is top of my mix when dj’ing too.

The recorded output of Dischord records could have made up my top 10, it certainly is one of the seminal labels. I’ve taken 2 with an Ian McKaye mix but there’s a lot more that could have been in here. 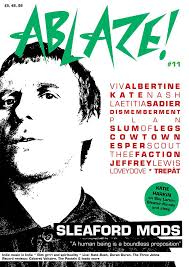 There’s a great interview in the latest Ablaze with Sleaford Mods which is the first time Ablaze has seen daylight as a new fanzine in 23 years. It can’t be that long, I exclaim. The facts don’t lie and barring a book which was a compenium of the first 10 Karren has been concentrating on her own life since the early 90’s. It’s back with a bang though. SLeaford Mods have lots to say in their feature.

LoveyDove are a diy pop duo, two people with a history of involvement and underground pop music activism

Laetitia Sadier was in Stereolab when Ablaze was last out. She is still putting out gorgeous pop music on Drag City Records .

The beauty about zines is the potential for new artists, I had Kate Nash written of as Katy Perry, no idea why but thankfully Ablaza has steered me right, a strong independent woman paving the way for others.

The Slits were one of the first strong independent band of female members. They paved the way and Viv Albertine’s book has some tales of those punk days. Viv is still playing music and I’ve included a past and present tonight.

Joanna Gruesome could be todays Slits, as could so many of the bands in Ablaze. Sugarcrush is from their record

Whilst it is predominantly women who feature in Ablaze some bands with male singers have sneaked in. Thankfully the Three Johns are in there, reveiewed from their recent tour and Thee Faction have their manifesto included, and rightly so.

Sky Larkin gets mention a lot in Ablaze *11 not only for Katie Harkin’s part in the band but also for her part in Sleater Kinney’s reunion. Katie played keyboard when the band recently reformed and toured Europe

Stereolab get mentioned earlier as laetitia Sadier’s old band, the interview wth Laetitia is particularly interesting in that there doesn’t seem to be a manifesto to the music but still she manages to stat “We have to be the masters of our own selves”, certainly a way to live but whilst looking out for others along the way.

The Dismemberment Plan are another that passed me by, there’s only so much time in the day and it doesn’t always involve listening to music you know, but I will be chasing out this band now that I know they reformed in 2013.

There’s a feature on the Indian music scene including a strong presence of post-rock bands. it makes perfect sense in the worlds third most popolous country. Woody accouche project a re feel good band from India.

Cowtown are closer by, from Leeds, England. I’ve dug out a Fugazi cover that features in thier set but the band are far from a covers band, it’s exciting pop all the way.

Slum of Legs are on Tuff Enuff records who I gushed about recently . Sasha Fierce is their new 7″

So there you, nearly, have it. An eclectic mix with a big nod to strong independent women and the riot grrl movement. A great zine, pick your copy up here but not before you listen to jeffrey Lewis

Bands that changed a life – The Three Johns

The Three johns – An institution not  a band

I often forget how impressionable I was as a teenager as I thought I furrowed my own way through life, no one call tell me what to do I would exclaim whilst searching out like minded individuals.  We are all individuals we would say once someone started the chant.  We had a music, a way of life that was ours, but of course we did what we wanted.

Well not quite but there was a soundtrack to it all for me. My youth is spent in 6 or 12 month periods and one or more of these definitely involved the three johns.  When they appeared on the tube with those red and black flags waving high I wasn’t too concerned about the sound.  When I went to Basement X and bought the first album I was enthralled by the sound.  This was no punk band in the conventional sense of the word. Whilst I listened to and loved a lot of racket being made by Punks and had my Oi compilations I was happy to hear something different but yet the same.

When I say the same it is the attitude, the diy independent spirit.  The Three Johns quite clearly had that.  They were out supporting the miners, rallying against apartheid and ready to kick out the tories, but with a drum machine and an eye on parody they were smashing the system their own way.  I was hooked.

I travelled to Leeds to see them, then London – ready to stand at the front of the stage, smiling in the wonder of it all.  When I saw two copies of Torches of Liberty on sale in Record and Tape Exchange I had to get them both, I’d already bought my copy after being on Summer holidays in Germany – my first trip to mainland Europe and what I remember most is buying records by the three johns and the ex.

Tagged as the three johns