Paranoid Visions have just released their new record. Cryptic Cross Words is the 5th album the band have released since their 2006 reboot. Add to this the multitude of singles and a myriad of
historical re-releases and compilations and it becomes clear that Paranoid Visions are a band who are not content to sit back and relax or attempt to trade on past glories. Indeed founder members Deko and P.A are of the opinion that there are no past glories with the recent releases being more reflective of what the band were about in the first place. Cryptic Cross Words, a culmination of a year’s recording and writing is an attempt to craft a specific album with a specific modus operandi.“With every release we have done, there has always been a compromise, and certain styles or genres we have wanted to explore have been almost achieved, but not executed the way we imagined them…until now”.
Switching rhythm section and losing a backing vocalist in early 2014 gave the band the opportunity to form the perfect line-up and create what the band believe is best album they have ever made. It’s
certainly a more focussed and strategic release that relies on soundscapes and moods that co-exist with the various musical genres the band continues to dip into. But it explores these cohesively
with production that has been described by one early reviewer as being “crisp but avoids the sheen of the nu”. Certainly this album owes as much to UK Decay as it does to UK Subs, or is “more
magazine than fanzine”.Lyrically the album is tackling different subjects ranging from the Catholic Churches abuse of
children, invasion in the Ukraine, sexual harmony, working culture and the voice of the downtrodden public on the verge of snapping. In the case of Anagram Sam the lyrics consist entirely of anagrams
(Anagram Sam, he’s one of those NAMELESS SALESMEN, his LIFE is a FILE of anagrams, he’s the SENATOR for TREASON etc etc….you get the picture!!) whilst the album’s closer, “baNAMA Republic” is a
delicate slow building acoustic song spanning seven minutes and sung by Aoife Destruction detailing the fall of the Irish economy and the corruption that facilitated it.
The album which I bought today in Tower Records is an aesthetically beautiful white vinyl LP with free CD and 16 page booklet which includes a real cryptic cross word and word search on the sleeve

Dublin’s the Jimmy Cake have their fourth album launched this week. 2724 days after 2008’s Spectre and Crown. Teen Mist is the shortest track on the LP, clocking in at a radio friendly 15 minutes and 10 seconds long. Master is three compositions laid out over a 72-minute journey through space, time and a musty & secluded railway arch off North Strand Road, Dublin where engineer, producer & hero John Spud
Murphy lost his mind but gained a twitch. Gone are the lush strings & understated beats of Spectre & Crown, replaced by vintage synths & psychedelic rhythms to create an ever-morphing, technicoloured
behemoth of a record. 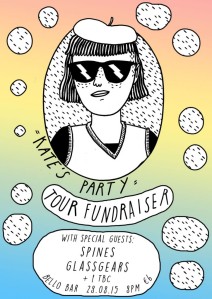 In a week of record launches Kate’s Party are doing one with a twist. They are launching a tape this week which is doubling as a fundraiser for their upcoming UK tour. Should be a cracking evening. 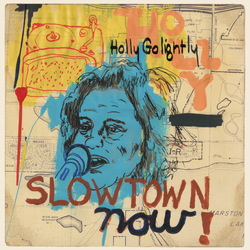 As mentioned last week Holly Golightly is bringining out her new album this week, first since 2004 -The band consists of Matt Radford (double bass) Ed Deegan (guitar) Holly Golightly (vocals) Bruce
Brand (drums) Bradley Burgess (guitar) Holly first came to musical prominence as a member of Thee Headcoatees, a Billy Childish/Thee
Headcoats all-girl splinter group in 1991. Four years later she broke away from the garage punk scene with the release of her debut solo album The Good Things, which featured a mix of folk, early electric blues, & ’60s beat influenced rock ‘n’ roll. It’s a template that she’s honed over the course of 13 solo albums, along the way impressing celebrity fans such as Jim Jarmusch (Holly’s track “Tell Me Now So I Know” featured as the main title theme in his Broken Flowers movie), and most notably Jack White who duetted with Holly on
“It’s True That We Love One Another”, the final track on the classic White Stripes album Elephant. Though it’s been 11 years since her last solo album, Holly’s been busy as half of blues/Americana duo Holly Golightly & The Brokeoffs (The Brokeoffs being multi-instrumentalist Lawyer Dave). The pair have released a string of well received albums, and undertaken many tours on both sides of the
Atlantic.
Slowtown Now! features 12 songs that will please fans old and new alike. Why not have a listen to
Seven Wonders

On the way
THe workmans club was a welcome addition to the Dublin gig scene 5 years. As it celebrates that milestone they are puttng on a week of gigs with low admission price. I will be up in the hangar
two night (at Jello and The Ex) but in case you’re interested

We Shall Overcome – Dublin – October 2-4

Peter Hook and the Light – The Academy – November 27

The Selecter – The Academy – December 11